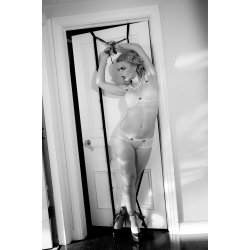 Great care was taken while I bound each red silky sash around her wrists and ankles as she stood, helpless at my door. I made sure to kiss and nibble around each tied extremity, and spent some time on the untied body parts as well. After I was certain the restraints were secure, I informed her I would be back as soon as the game was over, and hoped it didn’t go in to overtime. I was only kidding, there was no chance I was going to spend a single second away from her vulnerable form, but the look on her face, even after she realized I was joking, let me know payback was forthcoming – and I was looking forward to it.